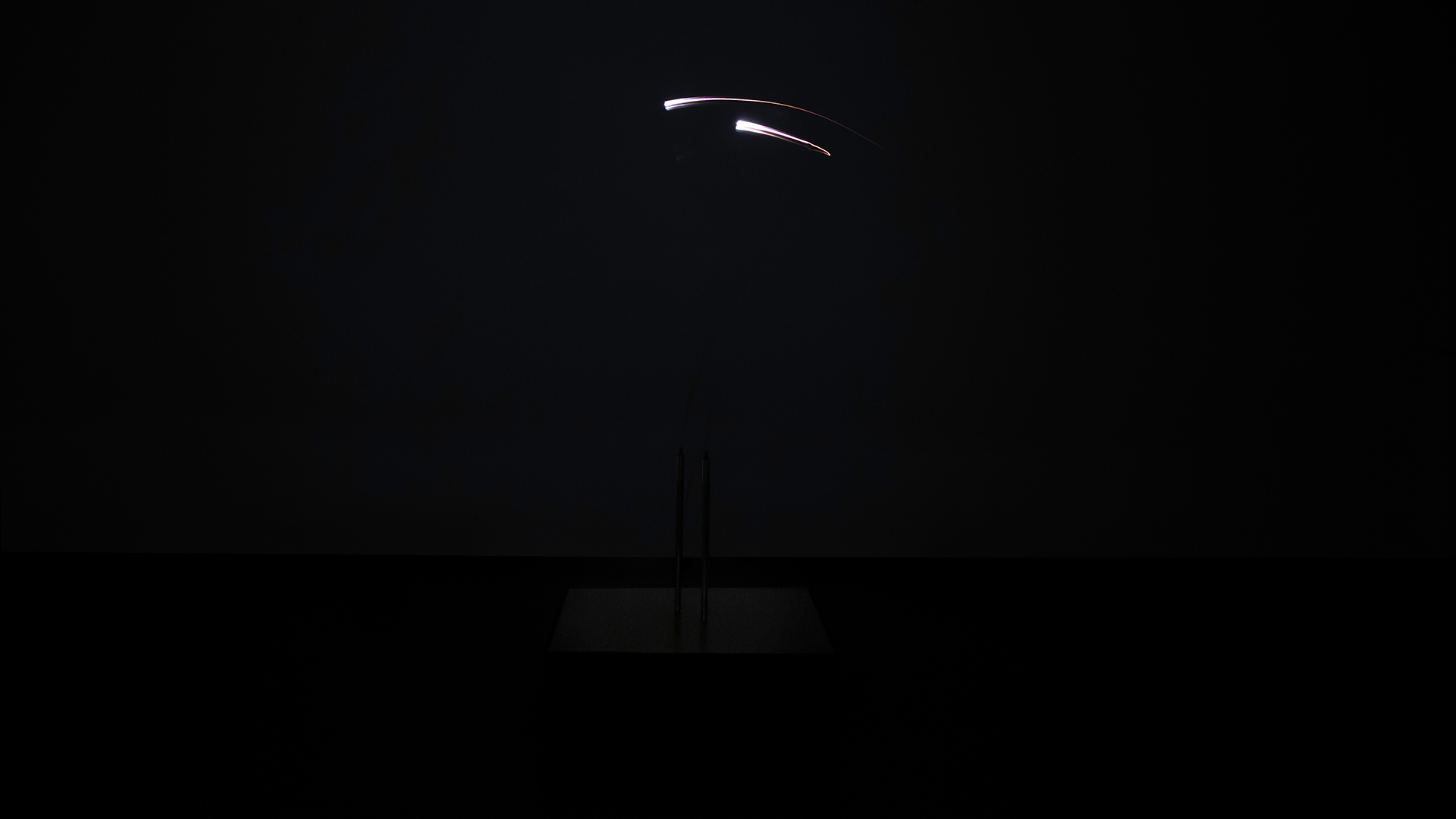 human traces in the behavior of machines

Similar to the other two projects in the series, "Expressing Objects" and "Once and Zeros", this work is also based on a developed technical theme that was applied in the context of the human-machine relationship. This, described later in the text, has been sharpened and applied with regard to Media Minimalism.

Two rotating objects driven by sound amplifying themselves while at the same time distorting that sound. Their encounter redirects the energy flow - a spark will light up, creating a soundscape of clarity and stopping their movements - but only for a small moment before they break apart and the created sparks fade into empty space.
No microcontroller, computer or other digital hardware needed, just an analog schematic.

The technical motivation of this work represents a mutual influence of auditory as well as visual content. In other live visualizations of sound, the audio stream is tapped in parallel after output and an abstraction is presented in visual form based on this. Here, no interaction between auditory and visual content is formed, but only the sound determines the adaptation of the visuality.

However, by a small adjustment of the structure it is possible to enable mutual influence.
In contrast to the previously shown setup, the visual content is switched in series before the output after amplification by an amplifier. This means that the amplified audio signals must flow through the visual output once and drive it. As the visual output influences the auditory signal and adapts, distorts or generates completely new sounds based on the visual state. This is only possible after amplification by a conventional amplifier, since the general audio signal does not deliver enough watts to drive components in a meaningful way.

In the course of test series, both motors and light bulbs have proven to be functional and aesthetically applicable components for a visual output. Since audio signals are AC voltages, two motors are always required for one movement. The technical structure shown below represents the smallest possible technical complexity in relation to the desired effect.

DC geared motors tend to respond to low frequencies in the sound spectrum, causing them to start moving. To get smooth motion instead of oscillation of the motor, a diode must be connected in front of the motor to get only voltage in the DC range. By combining two motors with inverted diodes, a coherent sound spectrum and functional movement is guaranteed.
Due to the flow of amplified audio signals through the motors, high frequencies are almost completely filtered out by the motors themselves and are not output in the downstream jukeboxes. Low frequencies, on the other hand, are distorted and manipulated on the basis of the motors' own movement, creating a completely new sound signal.

In contrast to motors, no diode needs to be connected in series for an incandescent lamp, as this is already AC-compatible in itself and thus functionally develops an aesthetic appeal.
An incandescent lamp affects the sound signal similar to a compressor. High frequencies are let through well and almost the entire frequency spectrum makes the bulb shine. This makes the bulb a good antipole to the auditory changes in the engine.

The components shown are applied as follows, based on the technical structure described above. Both motors drive brass tubes which are in unbalance.

When the installation is operating normally, the brass rods move abstractly driven by the amplified audio signal. As described above, they change the sound signal into a distorted substance that filters out high tones.

The movement and oscillation of the brass tubes causes the audio stream to occasionally touch them. This causes the audio signal to pass through these brass rods and the respective attached light bulbs, reducing the current flow through the motors, resulting in a short standstill of the motors. This is due to the lower resistance of the bulbs in relation to the motors.

For this brief moment, the sound image becomes clear and full, the bulbs light up according to the current audio signal before they go out and go out again.

To get an impression of this effect here is an example.
The original soundscape and 15 seconds later the same soundscape running through the engines.

The underlying soundscape for the installation, which was produced by Marcel Haupt and with the help of Dirk Erdmann, is based on sampled sine frequencies that flowed through the components of the installation.
Depending on how often a basic frequency was played and re-recorded by the components, the more it was distorted from the raw material. An example of a raw material sine frequency and 15 seconds later the same part of it is pulled through the motors several times can be heard here: